Labradorite is a mineral which occurs in a few different colours, most commonly a dark green-grey.
It has a flash of colour referred to as labradorescence, which can result in bright flashes of colour, most often greens, blues, and yellows. There is more information on the varieties of Labradorite below, in our Mineralogy section.

Labradorite was first discovered in Labrador, Canada, which is where the name comes from.

The material was apparently discovered by a Morovian missionary in 1770, but not much information about this event is available.

Labradorite is almost exclusively used as a decorative stone. It is very popular with jewellers, especially in the ‘wire wrapping’ style. It is also cut, carved, and polished – in some cases, it is used for larger decorative pieces, like worktops.

Chemistry
Labradorite is a plagioclase feldspar comprised of Albite and Anorthite. Some authorities consider Labradorite as a sodium rich variant of Anorthite.
It’s chemical formula is (Ca,Na)Al1-2Si3-2O8.
Colours and Variations
Streak
White
Luster
Sub-vitreous
Fracture
Uneven to conchoidal.
Crystal habit
Labradorite usually occurs in massive grainy forms, but can occur as tabular crystals.
Mohs hardness
6 – 6.5
Cleavage
Perfect
Specific Gravity
2.68 to 2.72
Easiest testing method
It can be a little difficult for beginners to distinguish between Labradorite, Spectrolite, and Larvikite. Knowing the locale can help – true Spectrolite is only found in Finland, but many Madagascan pieces are sold as Spectrolite too.
Larvikite is a grey-black stone with thumbnail sized flashes of white and blue, so it should be relatively easy to distinguish from the more colourful Labradorite. If you are in doubt, Larvikite does have a slightly lower specific gravity. 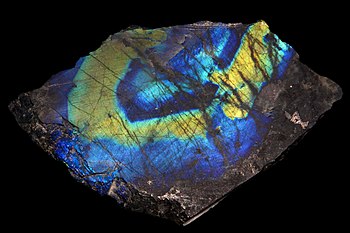 A polished piece of Finnish Spectrolite showing
a bright blue and golden colour. 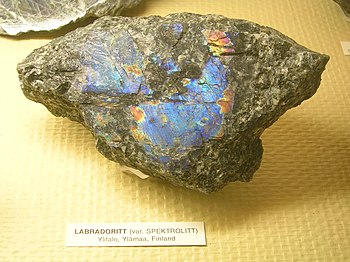 A rough piece of Spectrolite from Finland.

A polished piece from Madagascar. 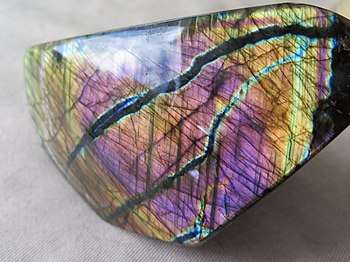 A polished piece from Madagascar
Purple colourations this bright are considered uncommon. A wire wrapped Copper necklace made by Wire Witchcraft