Sapphire is often used as a decorative stone, as I’m sure you’re aware. They are usually faceted, but are also sometimes cut en cabochon, used in rings, earrings, pendants and – well, pretty much every other type of jewellery!

Due to their hardness, Sapphires are used for non decorative purposes too, with places in high end electronics, optics, watches, etc. These are, however, usually synthetic Sapphires rather than natural.

There are a great many Sapphire locales, especially around Asia. Sri Lanka is one of the best locales for Sapphire mining, producing 90% of all Star Sapphires.

When most people refer to Sapphire, they imagine a blue gemstone often used for jewellery.

However, the term ‘Sapphire’ actually refers to all gem grade varieties of Corundum, with the exception of red Corundum – Ruby.

Sapphires can occur in a range of colours, including black, blue, brown, colourless, green, multicoloured, orange, pink, purple, grey, white, or yellow. Some may even change colour in varying lights.

Streak
White or colourless – however, Sapphire will almost always scratch the ceramic tile!
Luster
Vitreous to adamantine.
Fracture
Uneven, conchoidal
Crystal habit
Hexagonal
Mohs hardness
9
Specific Gravity
3.95 to 4.03
Easiest testing method
There are a huge amount of synthetic Sapphire substitutes on the market, so testing Sapphire is not something that is easily done without equipment.

A variety of colours of Corundum crystals, including clear, yellow, pink and purple.

A nice crystal of yellow Corundum. 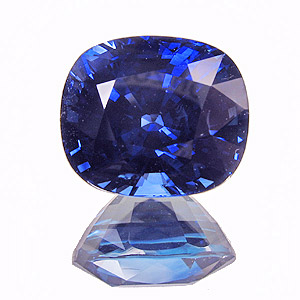 A cut and faceted blue Sapphire.

A cut and faceted yellow Sapphire.

A gold and blue Sapphire ring.

The ‘Star of India’, an almost flawless star Sapphire, mined in Sri Lanka.

The star effect, known as asterism, is cause by tiny inclusions of Rutile.

Unless powdered, there should be no health concerns with Sapphire or Corundum. Aluminium Oxide can be a fire/toxic hazard, but this should not be an issue with the crystalline form.