I’m sure some of you have heard of Abalone, and some won’t have heard of Paua. To simplify, they are two members of the same family.

Paua is simply the Maori word for the shell – and as such, the term is incredibly prevalent in New Zealand and has spread outwards.

Abalones are a type of shellfish found worldwide. On this site, when we mention Abalone, we are referring purely to the shell.

A gastropod mollusc with an open, spiral shell. There are several open respiratory holes around the shells outer edge.
The inner layer of the shell is made of nacre and often displays bright iridescence. The shell is roughly ear shaped.

Typically speaking, Abalone has three main uses. My knowledge of these is somewhat biased to the jewellery side, and to usage in New Zealand, as I’ve visited.

Abalones are considered a delicacy in a fair few places around the world, including New Zealand, Latin America, Guernsey, and Asia.

The Maori culture has used Paua in their decorative woodwork for centuries, and there is a huge tourist trade based around this. It is now used in a wide range of decorative items, set into resin or wood and sold as souvenirs.

Similar to the decoration aspect, Abalone is also used for jewellery – either natural or dyed. It has a gorgeous mix of colours even before dye treatment. As the shell is quite thin, it is only really suitable for flat beads, or cabochons.

Abalone has been used by Man since antiquity, either as a food source or a decoration. The oldest known find I am aware of is 100,000 years old, from a cave in South Africa.

Abalone is found in many ancient cultures around the world due to its abundance as an easy food source.

Since the 1950s, however, the mixed usage of this animal has led to overfishing – there are several places around the world which have imposed strict limitations on the amount of Abalone that can be removed. Certain members of the genus are now on the endangered list.

Most of the Abalone meat eaten worldwide is now from farmed sources.

There are too many species of Abalone to list all of, and too wide an area for locales to be particularly accurate. These locales should be considered ‘found off the coast of’. It is also worth noting that these are locales in which ‘Haliotis’ are found, not necessarily used for their shells or meat.

Chemistry
Ordinarily, this section would give a simplified overview of the chemistry in each particular mineral. The outside of the shell is an organic material comprised of ’tiles’ made of Calcium Carbonate, which does make it very strong – although small pieces are still brittle.

The inside of the shell consists of a form of Aragonite, known as iridescent nacre or ‘Mother of Pearl’.

Colours and Variations
Numerous species fall under the genus Haliotis. For decorative purposes, the shells can show iridescence including cream, green, blue, and a wide range of other colours.
Streak
N/A – unnecessary.
Luster
Greasy, pearly.
Fracture
Uneven, splintery.
Crystal habit
N/A.
Mohs hardness
Around 3.5
Specific Gravity
2.7 – 2.89
Easiest testing method
Eye identification ought to be diagnostic – iridescent shell with numerous holes around the outer edge – between 8 and 38. 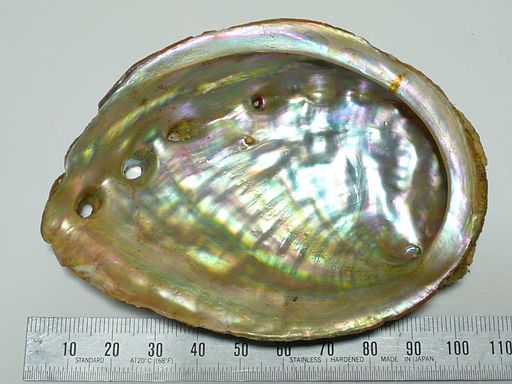 The underside of a natural shell, otherwise known as nacre. 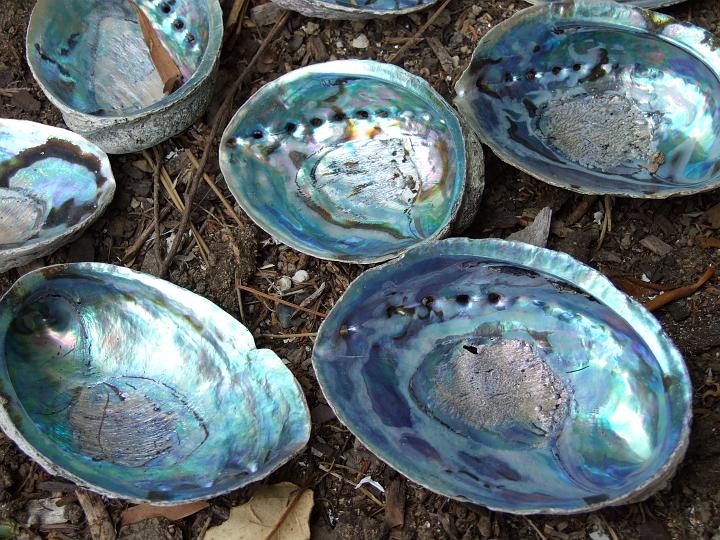 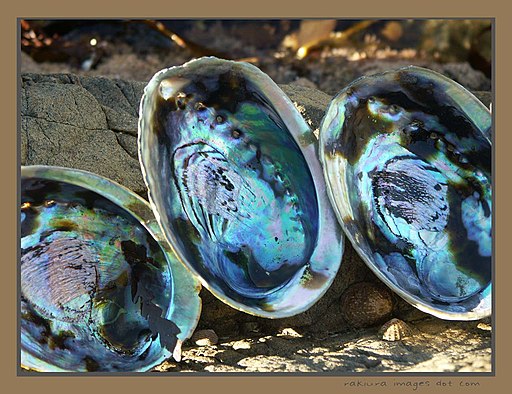 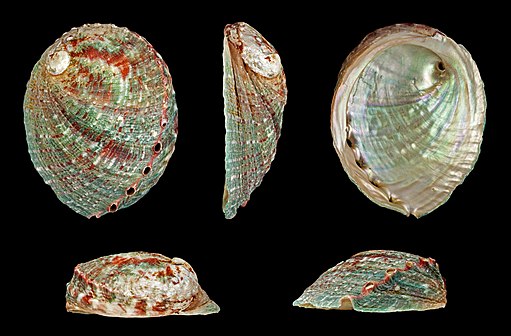 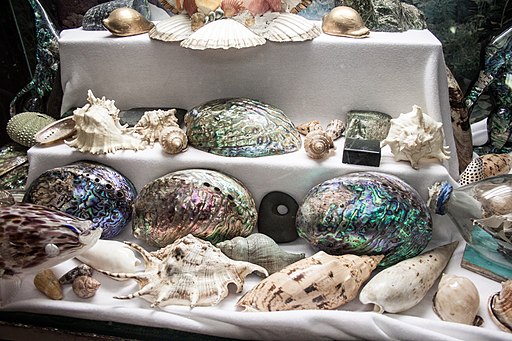 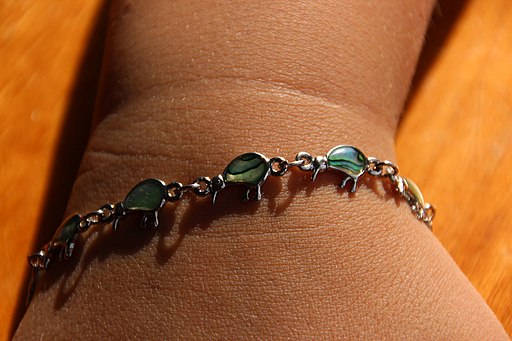 Abalone is both fine to eat and to handle. When cut and polished, or rough, it is fine.

The danger with this material lies in the actual cutting process itself – Abalone dust is incredibly bad for you when inhaled. To be clear – most organic materials and most rocks and minerals also produce dust which is harmful to humans.

As with most lapidary work, the advice is to always work the material wet, to avoid dust propagation as much as possible, and to wear either a forced air respirator or a good quality particulate filter mask.

Please note that some of these translations will refer directly to Haliotidaes use as a foodstuff.