So, what is the Mohs hardness scale?

Specifically, it defines hardness by the ability to scratch, or to be scratched by other minerals.

This gives us a very quick and easy baseline to narrow down unknown mineral specimens which can be done at home or in the field.

The test was originally invented in 1812, and as such, isn’t entirely accurate anymore – we have discovered serveral minerals harder than Diamond. However, given its simplicity it is great for field work.

A piece of advice..

Many websites online will recommend alternatives to the minerals given for Mohs testing. I do not recommend these.

Common objects are listed, such as your fingernail, a Copper penny, a knife blade, or glass. This may seem like a great way for the hobbiest collector to perform some basic testing, but unfortunately, it isn’t.

Now, the first and most important thing to note about this is – everyone is different. My fingernails may be softer than yours, harder than someone elses. I can definitely scratch Soapstone with my fingernail, which ranges from 1-4 on the Mohs scale, depending on the level of Talc it contains.

A Copper penny may be different in your country to mine, or to whomever gave out that piece of advice. In the UK, Copper coins minted before 1992 are 97% Copper – after 1992 they are electroplated Copper over Steel. American pennies (one cent) are Copper plated Zinc.

Knife blades, too, have variations – a stainless steel blade will be drastically different to a tool steel blade.

Given that the Mohs scale is generally used as a tool to narrow down a mineral specimen, it seems that introducing any unnecessary variables should be avoided wherever possible.

What minerals are used?

The original Mohs scale is as follows:

How does the scale work?

This chart shows that the Mohs scale is an ordinal scale – Corundum is nearly twice the hardness of Topaz, but Diamond is at least three times harder than Corundum. 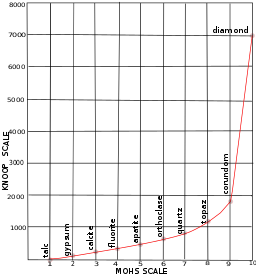 Down to basics, the real point of the Mohs test is to tell you approximately how hard a specimen is.

If you had an unidentified specimen that you expected or thought might be Amethyst, you’d look up the Mohs hardness level of Amethyst – online or in a reference guide. Amethyst is, of course, a type of Quartz – with a hardness of 7.

This is useful in distinguishing a piece of Fluorite from a piece of Amethyst, as Fluorite is a 4 on the scale and would be scratched by materials Amethyst would not.

Can you show me an example?

Yupyupyup! These images were taken for another article I’m writing, about testing fake Turquoise – however, it made more sense to have the Mohs testing article written first.

Turquoise is a frequently faked stone, naturally occuring at round a 5-6 on the scale.

This means that if my piece of ‘Turquoise’ can be scratched by a piece of Fluorite (4) it is almost certainly one of these two impostor minerals!

If it can be scratched by Apatite (5) it may be authentic, or it may be a harder piece of Magnesite. I realise 4.5 and 5 are quite different, but ideally for testing fully, we do not want to purely rely on Mohs tests. 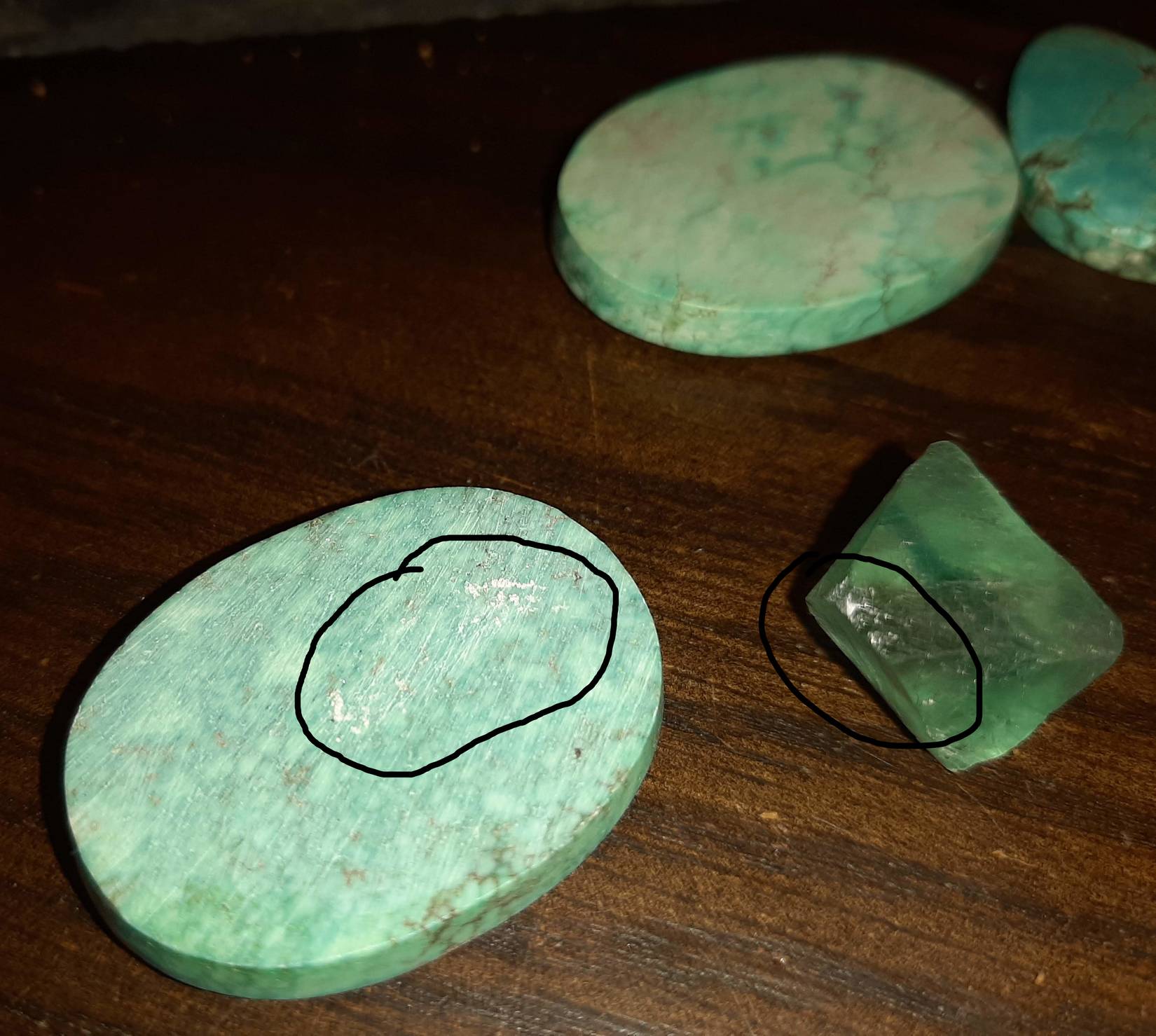 Using a piece of Fluorite to test against the ‘Turquoise’ – as you can see, the Fluorite has been scratched and the Turquoise (while marked) is not scratched.
The marks you can see are the dust from the Fluorite!

A piece of Apatite has marked the ‘Turquoise’ but has not scratched it truly. There is no powdered stone on the surface here. This makes me think they are around the same hardness and have left a polished line on each other. 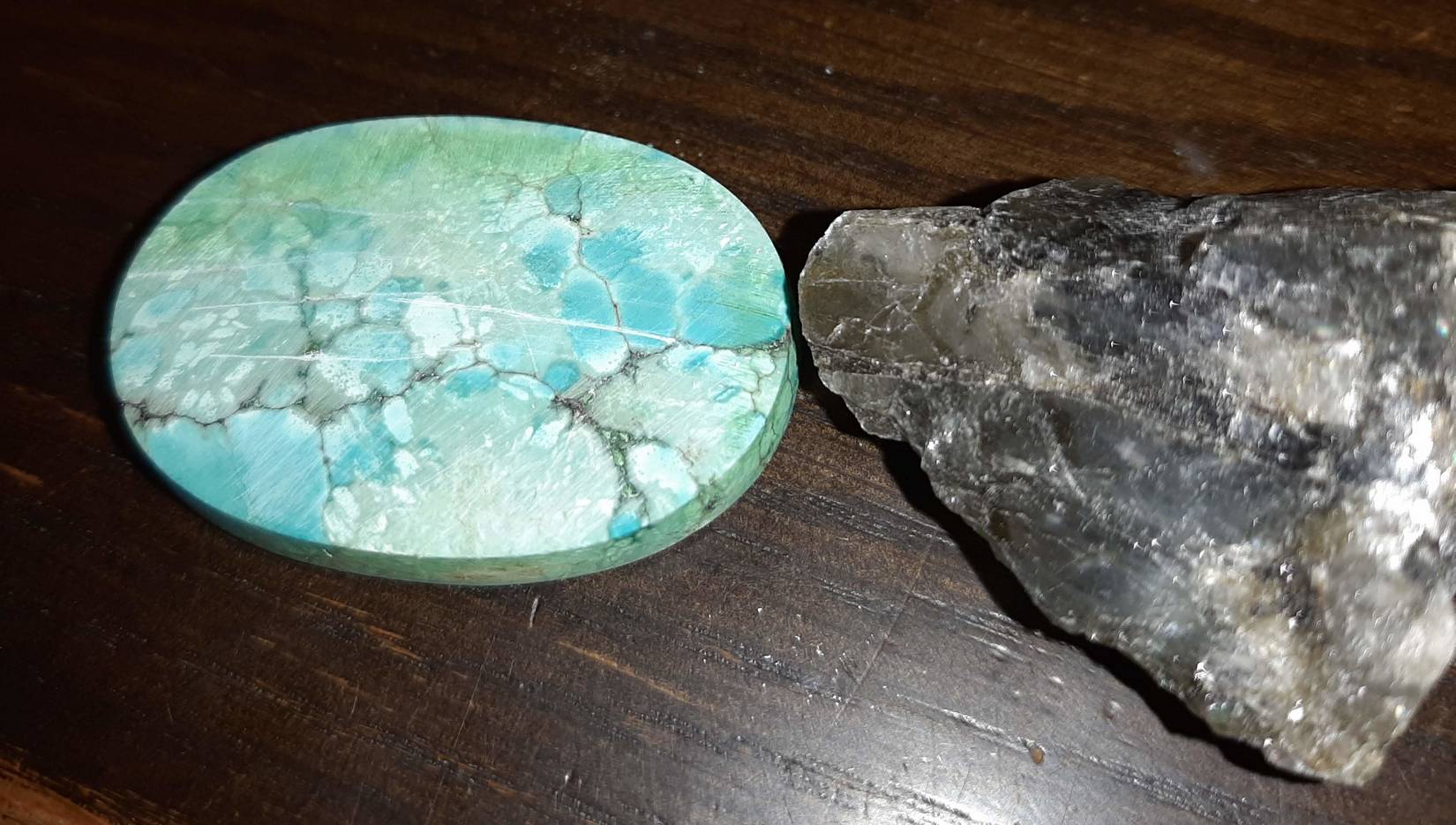 A piece of Labradorite has scratched the ‘Turquoise’. Labradorite is between 6 and 6.5 on the Mohs scale, and isn’t ideal for tests – but it was accessible, while the Orthoclase Feldspar was not.

The results I had here would indicate a hardness between 5 and 6.5. This is right in the range for Turquoise, so I would perform further tests on these pieces – a specific gravity test and a refractive index test should clarify these results.

With other materials, other tests may suit better – this is purely an example to show you how to do Mohs testing.

Basic Mohs testing kits can be found for sale here.