Cordierite and Iolite are two varieties of the same material – Iolite being a gem quality variety of Cordierite.

It can occur in several colours and range from transparent to translucent, depending on the quality.

Depending on the quality of the piece and the angle it is viewed at, this material may be light to dark blue, purple-blue, brown, yellow, or grey.

Higher grade pieces can be highly trichroic and will show different colours when rotated.

Cordierite was named after its discoverer, the French geologist Louis Cordier.

There is some speculation, backed by limited historical evidence in the sagas, that Iolite could have been the fabled ‘Viking Sunstone’, used as a navigational aid. The ‘sunstone’ may have also referred to Optical Calcite, a material that was found near navigational tools in a much later ship.

In industry, Cordierite is synthetically manufactured to produce ceramics, particularly for catalytic converters.

The gem grade pieces of Iolite are popular for jewellery, often as an inexpensive substitute for Sapphires.

There is a  reasonably large supply of the material available around the world, but its value a gemstone hasn’t yet been exploited and developed, meaning the prices of rough and cut stones are relatively low.

Iolite can also be relatively fragile due to its cleavage, and it is recommended that jewellers design settings to protect the stone.

Cordierite has a reasonably worldwide distribution, so listing all of the locales is impractical. I’ve listed some of the largest deposits, and some of those with Iolite quality crystals.

One of the easiest ways to distinguish Iolite is with a dichroscope, a jewellers tool used to inspect pleochroism. An examination by eye may be enough to give you an idea, but it can be difficult to distinguish between Iolite and Alexandrite, another colour changing mineral.

However, if you do not have one available, a hardness test will help to distinguish between Iolite (7-7.5), Sapphire (9), and Tanzanite (6-6.5). A streak test and specific gravity test will help to narrow it down from other minerals.

The left image is in polarised light. 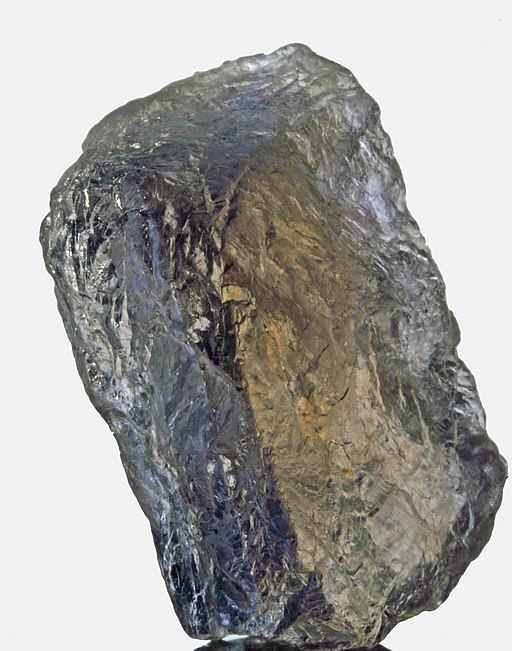 You’ll find many lists online that say Cordierite/Iolite is toxic because of the Aluminium it contains. While you shouldn’t be putting this material into drinking water, I would point out that a lot of campsite crockery is solid Aluminium. Unless you are eating or inhaling powdered aluminium, the risk of metal toxicity is minimal.

However, almost all rocks, minerals (and, frankly, almost all other substances on earth) can produce toxic dust when cutting, which can cause serious respiratory conditions including silicosis.