Gemstones and Minerals and their use in wars and combat

I haven’t actually read a post quite like this before, so I decided to write one. It focusses on two of my favourite subjects; minerals, and military history.

The information in this post is backed up by various sources where possible; given the nature of some of the stories it can be hard to truly verify them, however.

Now – before I write any more, I’d like to point out that a fair few things have been left out of this article, specifically, metals. We have all heard of the Bronze Age, the Iron Age, and the weapons used in those times, which eventually led to steel blades, of which more modern versions are still used in war (and every day life) today.

I have also left out the majority of modern weapons – explosives and other weapons do contain minerals, elements, chemicals, and combinations thereof, but this article is intended to be reasonably specific, and not necessarily an overview of chemistry in weapon manufacture.

During the stone age, simple tools were made by hitting rocks together until they broke, and one formed a sharper edge. These were, in effect, the first stone tools ever made by man.

Over time, they developed techniques for knapping stone, eventually leading to the invention of the hand axe, and the techniques to carve more precise items, including spear and arrow heads. The oldest stone knife found in Europe currently known to exist is around 1.4 million years old, and was used long before Homo Sapiens developed. [1]

However, stone was not only used in warfare in ancient times – obviously, buildings were and still are made of stone, and in the middle ages of Medieval Europe, stone was a devastating force during castle and fort sieges, whether from the attacking sides trebuchets and onagers, or being thrown by the defenders onto the heads of attacking forces.

Almost everyone knows that flint played a huge part in the evolution of our species. As it is relatively easy to work with, it is one of the best things to make tools from, when you are starting with nothing.

Over human history flint has been used to make knives, spearheads, arrow heads, axe heads, and more – war clubs and the like.

The carving of flint was so commonplace that pieces of worked flint are still found today in some parts of Europe and Africa.

Chert was also used in a very similar fashion, both by ancient Europeans and Africans, and until relatively recently by native Americans, the Aborigines of Australia, and the Maori of New Zealand.

The usage of Flint in warfare surged again in between the 15th and the 19th century, with the introduction of flintlock firearms. Gunflints made in Britain can be found around the world, due to the vast expansion of the British empire, and the important manufacturers based in Brandon, Surrey. [2] 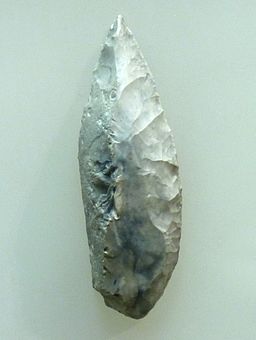 Obsidian is a form of volcanic glass, which was knapped by many ancient peoples in a way similar to flint, to make small knives, arrowheads, and axeheads.

It deserves a special mention, though, for it does hold some other interesting properties.

Obsidian ‘swords’ known as ‘Macuahuitl’ were made by the Maya and Incan civilisations of Mesoamerica – although, in truth, they were closer to wooden clubs with sharp pieces of Obsidian glued into the sides.

It is possible some Mesoamerican cultures also made blades purely of Obsidian, although they would have been brittle and suitable only for ceremonial use.

Obsidian can be used to form an extremely sharp edge – far sharper than modern steels. It is now actually possible to purchase scalpels made from Obsidian online, although they presumably have limited uses. [3]

A modern recreation of a Macuahuitl.
Photo By Zuchinni one – When it was given as a gift, CC BY-SA 3.0, Link

Both Jadeite and Nephrite Jade have been used as weapons over the years.

In Europe, Jadeite was carved into axeheads in around 4000BC and eventually wound up in the UK. It is likely these weapons were ceremonial, at least to an extent. [4]

In China, Jade was mined from around 6000BC and was almost certainly used in weaponry. There are many examples from around 1600BC onwards, including the image shown to the right – a Shang dynasty blade with a thick looking tang.

The Maori peoples of New Zealand made war clubs from New Zealand jade, collectively known as greenstone In their language, it is known as ‘pounamu’, and is of great significance to the Maori, and, by extension, the culture of New Zealand as a whole. 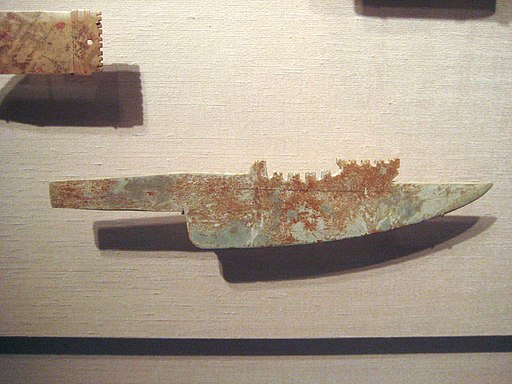 This section contains two stories about the same type of stone – one is true, one is the subject of academic debate but does seem very likely.

The stone in question is known as ‘Iceland Spar’, or ‘Optical Calcite’; a clear stone with interesting optical properties.

It is said that Vikings used the stone to find the sun on a cloudy day, using the polarizing effects of the stone. Given that there are references to a ‘sunstone’ helping navigators to find the sun on cloudy days (the Saga of Saint Olaf), and pieces of Iceland Spar have been found on wrecked Viking ships, it’s certainly possible! [5]

There has been a significantly more modern use for Iceland Spar, too – in World War 2 the Polaroid corporation developed a form of gunsight for anti aircraft weapons, using the stone for its excellent optical properties. [6]

A synthetic alternative was created soon afterwards, though, which was significantly cheaper than mining the Calcite.

These two stones were used in much the same way as many others – they can be worked to form a sharp edge, and are quite hard, so make a decent knife, axehead, arrowhead, etc.

Quartz, however, has an interesting use which is not weapons related, but sprung up between 1920 and 1950. It’s Military usage started in WW2, as demand for accurate crystal oscillators for radio communications equipment skyrocketed. Quartz could be used to create a signal with a precise frequency, which stopped ‘drift’ between radio frequencies, which was causing interference at the time.

As an Iron bearing ore, Hematite arguably doesn’t fit in this article – we are not talking about iron weapons, however.

Due to its strong red colour, there is a good chance Hematite and other iron containing ores or clays may have been crushed and used as war paint by Native Americans, and possibly other civilisations around the world. The Romans believed it was connected to Mars, the God of War, and carried it into battle.

Yes – we know! Meteorites tend to be metal based, and shouldn’t really be in this article. But… you know… they’re so cool.

The ancient Inuit people were known to make iron tools from Meteoric Iron, including spear heads and blades, and it is seeming quite likely that the Egyptian Pharaoh Tutankhamen was buried with a knife forged from a meteorite. [7]

In modern times some luxury knives are made from pattern welded meteorites. 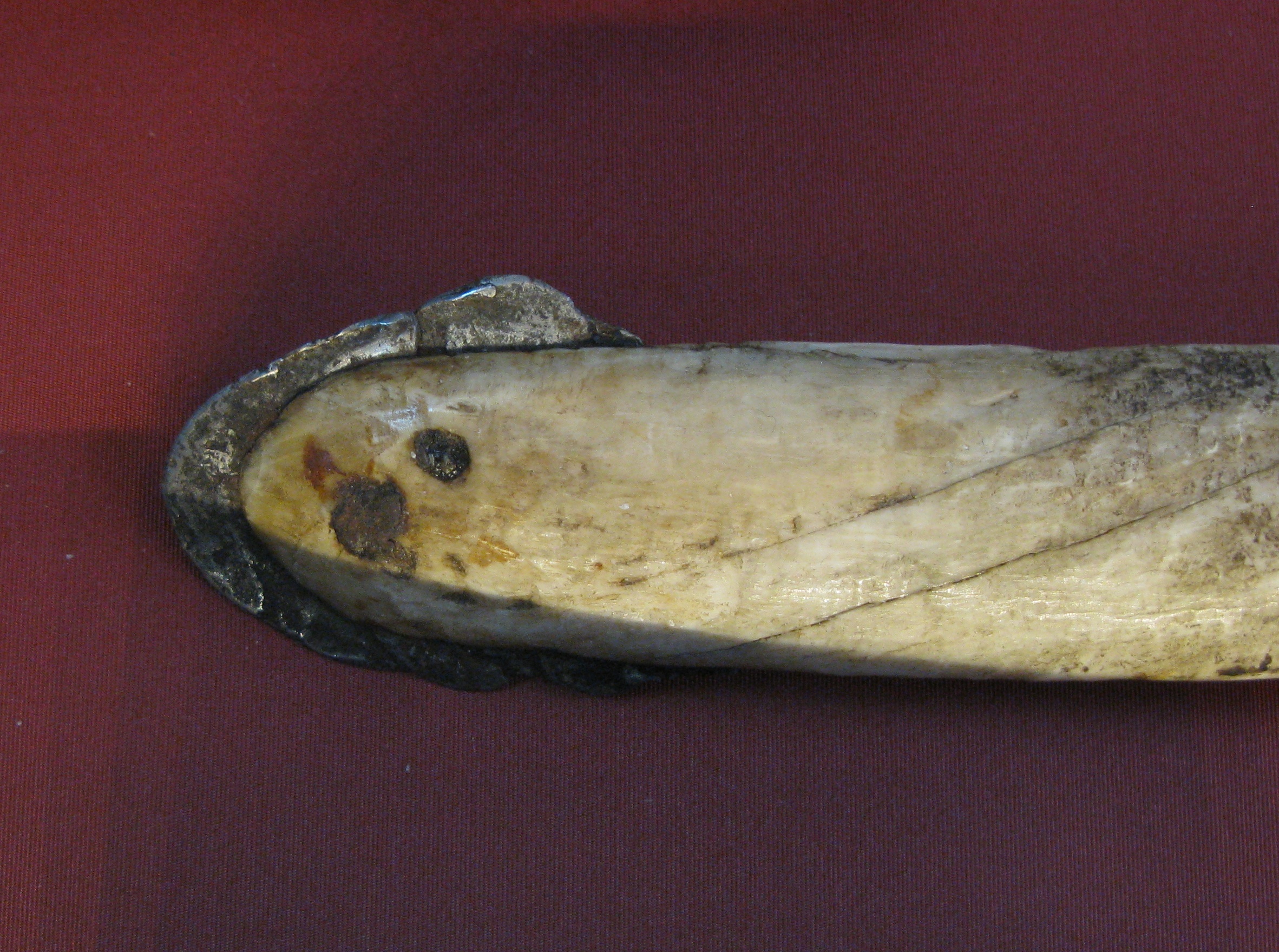 An Inuit lance with a Meteoric Iron tip, By geni – Photo by user:geni, GFDL, Link

Now we’re really getting into the realms of myth and legend, although personally, I believe this is a more recent myth, possibly fabricated to advertise the stones.

A google search for ‘Hanza Tribesmen’ [8] will reveal the story, which states in 1892, Hanza tribesmen used Garnet bullets or threw Garnets, in the belief that the glowing red stone would cause grievous injuries.

I can find no historical record of this, and the only source of the information seems to be sites that have copied from one another. It’s a nice story, though.

Another legendary story, and another mention of Obsidian!

According to Apache legend, US cavalry surrounded Apache fighters on a mountain in Arizona, and rather than be killed by their enemy, they chose to ride from a cliff. Upon hearing the news, the Apache women cried, and these tears were said to turn to Obsidian glass. [9]

Of course, it is difficult to verify if the story actually happened, and Obsidian is a volcanic glass, but it’s nice to be able to explain the names of stones sometimes.

I hope you enjoyed reading this. I realise its not a typical article, and it concerns two fairly niche topics, but I learned a few things writing it.

Do you know of any gemstones or minerals that were used in war, warfare, or as weapons? Leave a comment below.